For years, researchers on child development have lamented the “vocabulary gap” between middle-class children and children from lower-income families.

Research suggests that by age 3 children from poor households hear 30 million fewer words than children from wealthy families. That word gap begins to show within the first year of life and widens through the toddler and early childhood years.

On Tuesday the PNC Foundation and Webster University unveiled a two-year “Mind Full of Words” program to help build vocabulary for children living in lower-income areas of University City and south St. Louis. The initiative is backed by $1 million grant from the PNC Foundation and involves libraries, pediatricians, schools and day cares and several literacy and early learning agencies.

The new initiative is part of PNC’s Grow Up Great early childhood program which has launched projects in several metropolitan areas around the country. In November Scully was also a keynote speaker at a local forum urging the business community to become more involved in early childhood issues in the St. Louis region.

St. Louis was one of 10 cities chosen by PNC Foundation to participate in its nearly $11 million nationwide vocabulary-building program. It is expected to reach about 2,000 children living in northern University City and in the Carondelet neighborhood of St. Louis.

The neighborhoods were chosen in conjunction with Webster University’s School of Education which further developed local agency partnerships and will also oversee the initiative. Students in the education program were were given the task of analyzing neighborhoods in the region to determine where such a program could work well given the challenges and resources in the area.

Brenda Fyfe, dean of the college of education, said Webster University students will further examine program effectiveness and ways to broaden the program’s reach over the course of the grant.

On Tuesday, SLTRC presented recycled shoe boxes for some 20 young children on hand at Webster’s downtown St. Louis campus to unveil the program. The shoe boxes will be used to start “word banks” in which children in the neighborhoods will be encouraged to collect new words during their daily experiences. The full initiative will include literacy events at the libraries and various community-based resources and educational programs for kids, parents, educators and early child care providers.

Under the program, pediatricians from 16 area medical clinics serving lower-income families have also agreed to discuss the importance of reading to young children during routine well baby and early childhood check-ups. The physicians will also distribute free books during those visits.

Parent cafes will further be held in the Cabanne and Carpenter library branches in St. Louis.

We're not around right now. But you can send us an email and we'll get back to you, asap. 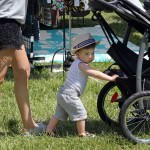